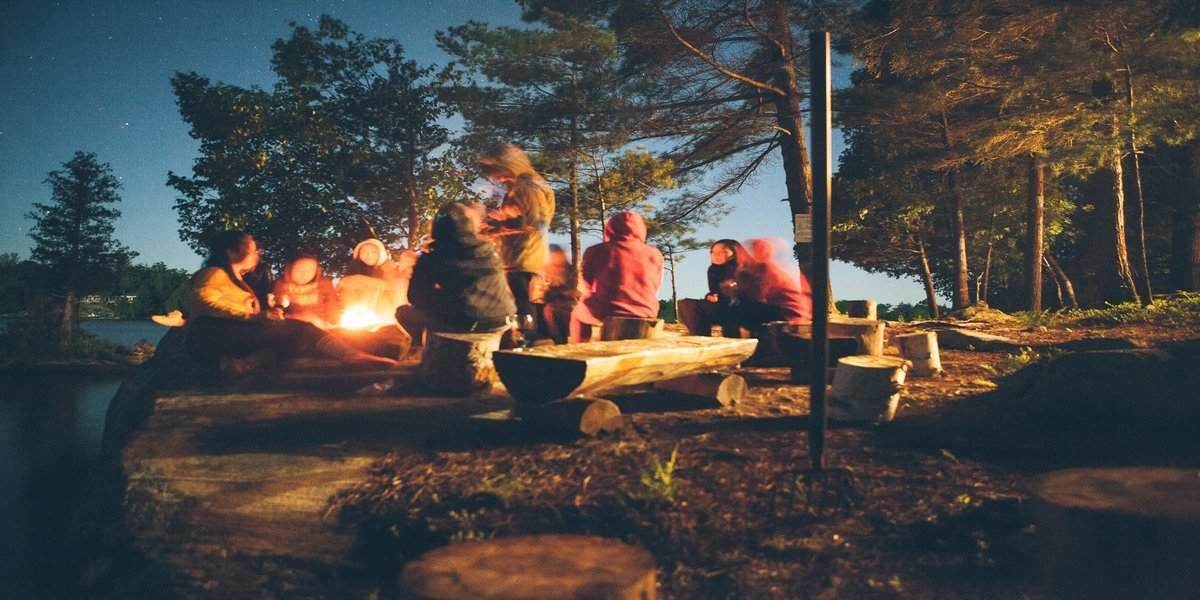 When days grow short and nights get cold,
And autumn trees turn red and gold,
Halloween will soon be here,
When every soul will quiver with fear.

We dare you to read these scary fireside stories,
Full of blood, guts, and evil laboratories,
They may be false, they may be true,
Find a trick, or a treat,
For you…

Keep reading our scary fireside stories if you dare… Halloween 2021 is coming!

‘Twas a chilly winter’s night, and the wind was particularly strong when Mrs. Turner opened the curtains to see if she could see any sign of her guests arriving. It was The Turner’s 13th booking through Glamping Hub, and there had never been any issues in the past. Perhaps they were lost? Or worse!

Mrs. Turner called the Support Team at Glamping Hub, who assured her that her guests had just called to say they had arrived. She rushed outside to the yurt to find no one there. As she stepped inside, her breath was visible in the crisp air, and the fireplace she had on to warm up the yurt had been put out. Each time she tried to relight the fire, a cold gust of wind would quickly quell it. As darkness fell, the guests had still not arrived…

The next day, she went back to the yurt, which had been locked, to find all the beds unmade, all the cabinet doors pulled out, and the dreamcatchers tossed around. She rushed back to reception with the intention to call the police when she noticed that the guestbook was open. She turned the book around and, to her dismay, an elegantly, handwritten review had been left that simply read: “We felt invisible the whole time.”

Jess hated being without her cell phone, and she hated everything about the countryside—the smell of farm animals, the dirt, and especially the lack of Wi-Fi. She worked in Public Relations and relied on social media for fashion and anything current. It was her husband’s birthday; he loved the great outdoors, and they were glamping as a birthday treat. Jess squealed as her feet squelched in the muddy field while she carried her things towards the tipi.

That night, Jess found it extremely difficult to sleep. The ground was hard, and her husband was snoring loudly. She decided to go outside for a walk. To her amazement, she started receiving text messages all at once. She had one bar of Wi-Fi! Jess decided to try and follow the source to see if she could get a full signal.

She tried several different directions before the signal started getting stronger and stronger with each step. However, it also started to get colder and colder. It got so cold that Jess couldn’t go any further. As she decided to walk back to the tipi, she noticed the Wi-Fi signal had completely disappeared. Spooked, she ran all the way back.

She climbed into the tipi as fast as she could, and when she got inside, there was blood everywhere and no sign of her husband! Suddenly, she got a full signal again and started receiving messages. Two were from her husband. One read, “Hey Jess, where r u?” The second message simply read, “Get help.” It was then that she noticed the name of the Wi-Fi connection: “YOU ARE NEXT.”

A man was walking through the forest, as it was starting to get dark, when he noticed a young woman looking lost. He asked her what her name was and told her to follow him back to the cabins. She thanked him profusely and started to walk with him. They tried to make polite conversation. After a few minutes, the girl fell silent. The man asked which cabin she was staying in, but when he turned around, the girl was gone. She had completely vanished! When he reached the cabins, he tried to tell the host about her. The host didn’t know of any girl…but her own daughter was killed in the woods many years ago, hiking in the forest at night…

As they followed the host outside towards their pod, the youngest of The Campbell’s noticed one pod away from the others that had been boarded up and heavily padlocked. Without little Matthew having said a word, the host turned to the family and said “No one is allowed in there; it’s just a store room, and it is off limits.” She reminded the family of this several times before letting them in their pod for the night.

The next night, Matthew sneaked outside in the middle of the night, and he saw a small flickering light coming through the boarded up windows from within the mysterious pod. He tried the handle of its front door, and sure enough, it was locked. He bent down and looked through the wide keyhole. What he saw was an old mattress on the floor, and in the corner, there was a woman whose skin was incredibly pale. She was leaning her head against the wall, facing away from the door.

The next day, he returned to the door and looked through the wide keyhole. This time, all he saw was redness. He couldn’t make anything out besides a distinct red color. Perhaps the guests of the pod knew he was spying the night before and had blocked the keyhole with something red.

At this point, Matthew went to the front desk, embarrassed that the pale guest had known he was spying. “Did you look through the keyhole?” the host asked. Matthew told her that he had, and she said, “Well, I will tell you the story of what happened in that pod, but you mustn’t tell anyone else.” Matthew nodded and she continued, “A long time ago, we had a guest there, and whenever she stayed, all of the other guests would get terrible, vivid nightmares. But one day, she disappeared without a trace. She was not ordinary. She was white all over, except for her eyes…they were red!”

Lovers of the Silver Stream

Humphrey and Gwyneth were celebrating their engagement with a romantic adventure in the Hocking Hills of Ohio. It was a particularly pleasant afternoon when they finally reached the charming little town of Moffat, where they had booked a stylish vintage Airstream for the weekend. They were laughing and making eyes at each other as they were sipping on coffees in a cute café downtown.

The locals were extremely friendly, and everyone stopped to welcome them. The hollow-eyed waitress asked them where in town they would be staying. When Humphrey mentioned the Airstream, the waitress stopped him abruptly. “Be careful, you two…” whispered the waitress. “Do you know about Frederic and Laura?” she asked quietly, as she looked around to see who else was listening. Humphrey and Gwyneth shook their heads. “Meet me out back in five minutes,” begged the waitress.

They stood in the parking lot and the waitress told the story. In July 1947, a dazzling Hollywood actress named Laura Freemartins was last seen in her brand-new Airstream trailer on the set of an untitled Halloween film. Her disappearance was disturbing to all and shocked the town of Moffat. The film was never finished, and the set remained untouched. Some theories blamed Frederic, Laura’s husband, for the death, as there were rumors that he was involved in a cult. He was tall and gaunt and later became a recluse on his desolate property…

Before the waitress finished, the customers from the café were all gathered in the parking lot, all staring eerily at the three of them. “Rosie!” one of the older customers shouted, before quickly changing her tone and smiling towards the couple. “We must apologize for Rosie; she has a flair for the dramatic.” A younger customer chipped in, “You are going to have the best time at Frederic’s.” Another gave out a dreamy sigh: “It is so romantic!” Rosie gave the couple one last look before walking away.

One could tell the grounds were once extravagant and luxurious; however, it appeared bleak and lifeless as the couple pulled up to the Airstream. There was a faded, muddy newspaper mixed in with the leaves on the floor. Gwyneth noticed the headline: “FREEMARTINS’ DISAPPEARANCE STILL A MYSTERY.” Maybe Rosie was telling the truth?

Frederic’s maid checked them in and opened the Airstream. In contrast, the interior was elegant and glamorous, with red velvet furniture and gold furnishings. The couple felt reassured. They were easily lulled to sleep.

During the night, both experienced nightmares, and the couple simultaneously awoke from a sudden jolt. As they peeked through the curtains, they saw everyone from the town standing around the Airstream, including the customers from the café, as well as Frederic and his maid. Terrified, the couple tried to open the door to find out what was happening. It had been locked…from the outside!

The elderly maid removed her hood; she looked familiar. Humphrey recognized her. It was Laura Freemartins! It was her! She was alive! The elderly maid breathed on the window and started writing in the condensation…L A U R A F R E E M A R T I N S. The couple shrieked as the letters started to move around…A I R S T R E A M F U N E R A L.

Your friends may be scared to death, but don’t let them starve to death. Make them some of our favorite fall campfire snacks!

Still not scared? Check out our best Halloween destinations in Europe for one heck of a time! Remember, Halloween 2021 is coming!