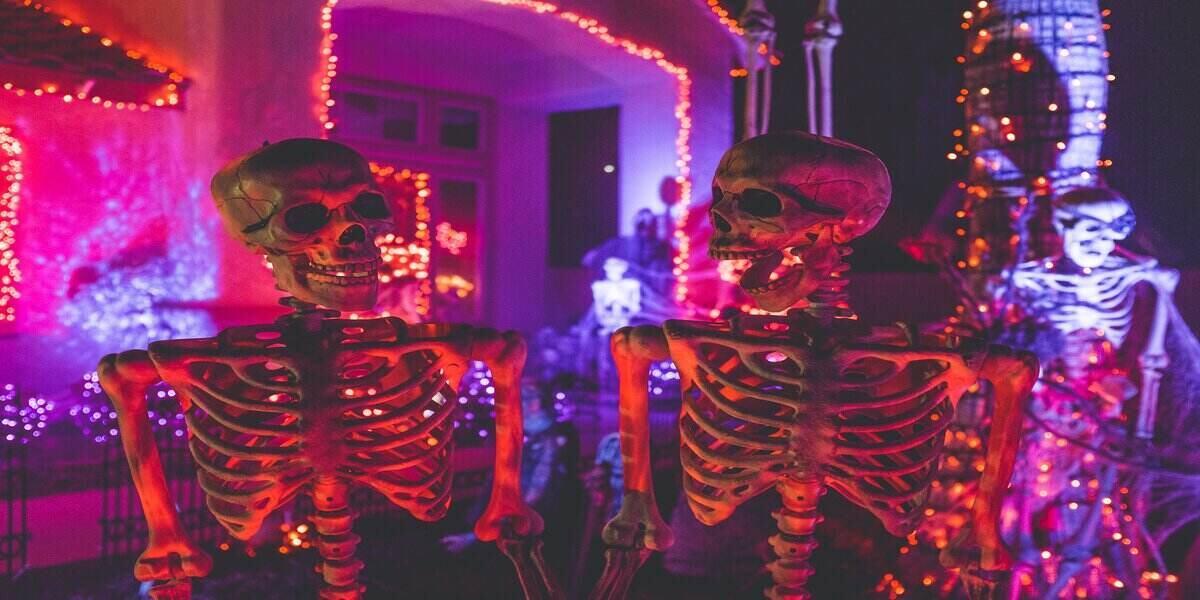 If you’re looking for the best Halloween destinations for a fright fest on All Hallows’ Eve, consider heading to Europe for some spine-chilling scares. From the birthplace of Dracula and vampire balls to macabre dungeons and abandoned insane asylums, these 10 unnerving destinations are sure to give you a bloody good time this October! So for the best places to go for Halloween – read on!

When it comes to Halloween, Europe has had its own traditions dating back to ancient times. With its ancient Celtic traditions, Ireland getaways are a chance to discover one of the birthplaces of Halloween, as 2,000 years ago, the pagan inhabitants celebrated the end of their pastoral year at the festival of Samhain. The mysterious druids would ceremonially extinguish and relight the flames of old fires while evil spirits were released from the Otherworld to be seen by mankind for one night of terror.

Nowadays, the Samhain Parade begins at 7 p.m. in Parnell Square, and the enormously popular spectacle sees the streets filled with horrific creatures, frightful monsters, eerie ghosts, and colorful dancers. At the end of the parade, ghouls and demons alike can enjoy a spectacular fireworks show in one of the very best Halloween destinations in Europe. 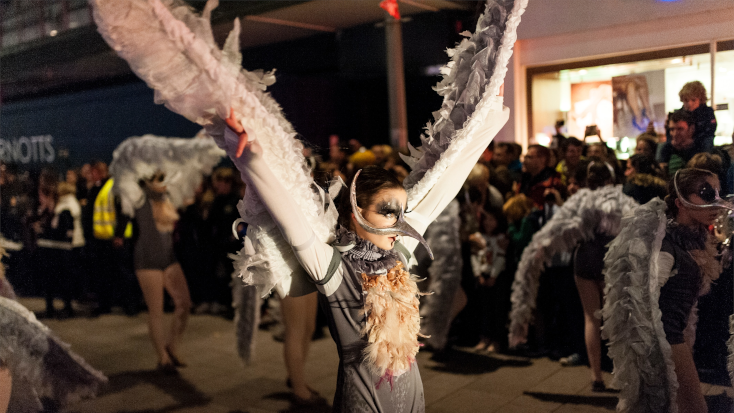 2. Discover the best places to go on holiday for Halloween:  Transylvania getaways in Romania await

Looking for the best places to go on holiday for Halloween? As the native home of the most famous vampire of all time—Bram Stoker’s Dracula—this is undoubtedly one of the best Halloween destinations and will send a shiver down the spine of even the most daring adventurer. The world-renowned bloodsucker is mostly inspired by the aptly named Vlad the Impaler. During the 15th century, he struck fear into the hearts of his enemies and subjects alike after holding a banquet in which he had all of the guests savagely stabbed and then impaled on spikes and left to twitch to their untimely ends.

Today, those with the courage to visit the infamous region can enjoy a remarkable Halloween party at Dracula’s birthplace, the medieval citadel Sighișoara, or experience the chills of the underworld at the Halloween monster party on October 27 at the absolutely stunning Bran Castle. 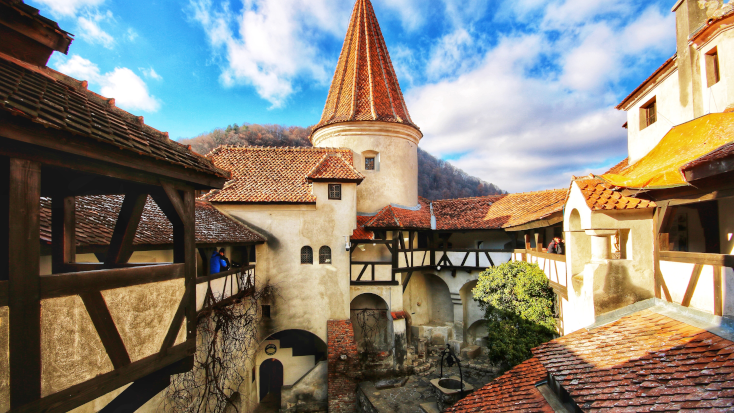 3. Things to do in Scotland for Halloween 2022? Visit Edinburgh for more spooky getaways this year!

Looking for things to do in Scotland for Halloween 2022 and based in the UK? Even though the Scottish capital is widely regarded as one of the most beautiful cities in Europe, it hides a harrowing and grisly past, and as such, makes it onto our list of places to spend Halloween in Europe. During the 17th century, the cities overwhelming rat population spread a deadly plague throughout its inhabitants.

The belief at the time was that the infected were damned, and for this reason, over 300 helpless residents of St Mary’s Close in the Old Town were entombed alive until the lethal epidemic had passed. Present-day visitors to the city can take a tour of these now subterranean lanes and hear the nightmarish tales of the doomed Scots.

Those looking to combine thrills and chills can head out on a tour of the haunted pubs on the Royal Mile before checking in at Frankenstein’s Bar for a night of hair-raising partying. 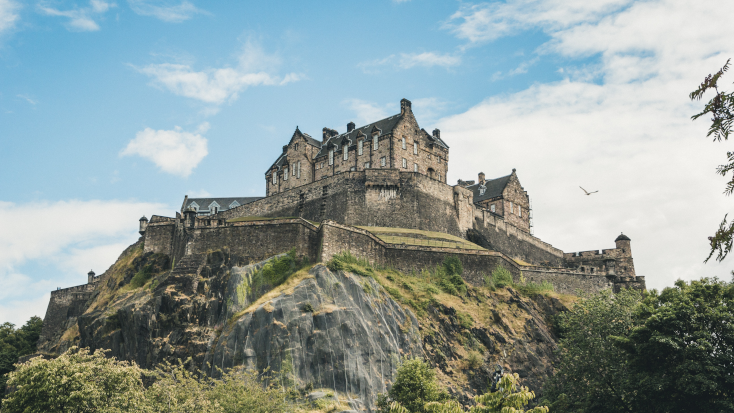 4. Halloween 2022 ideas and spooky places to go in England: visit London for a fright

As the prior hunting grounds of one of the most infamous serial killers in the world, Jack the Ripper, the cosmopolitan capital of England has a long and gruesome past of macabre dungeons, bubonic plagues, and unnerving back streets. It’s definitely not short of a few Halloween 2022 ideas!

During Halloween, brave visitors can take a chilling tour to the sites where Jack the Ripper brutally murdered five of his victims; experience the pure terror of the London Dungeon with its blood-curdling torture devices; or watch a show at the world’s most haunted theater, Drury Lane, where the menacing soul of the Man in Grey is said to stalk the upper circle to this day.

If spine-chilling scares are what get your blood-pumping, London glamping is sure to give you one heck of a time this Halloween. 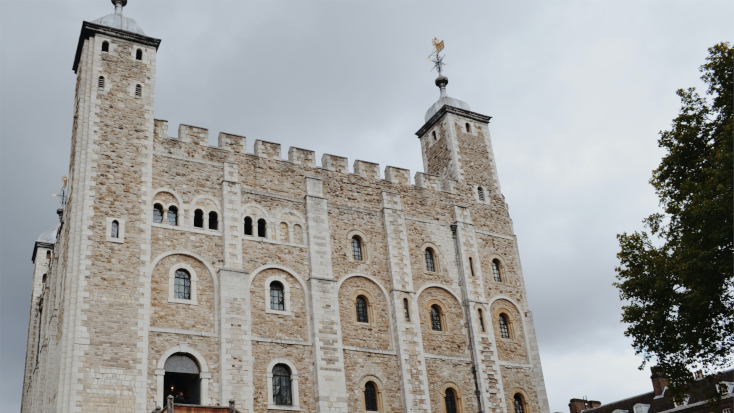 5. Best Halloween family holidays in Derry, one of the best spooky destinations in Northern Ireland

When it comes to glamping, NI has some great spots for this time of year. As the Samhain moon draws near, the creatures of the night flock to the one-of-a-kind festival in Derry for the best Halloween family holidays in Derry. Originally a fancy dress party in a local pub three decades ago, the event has mutated into an extravaganza with tens of thousands of people enjoying a uniquely chilling experience.

The celebration contains over 100 events in 40 venues across the city, with an action-packed schedule of music, food, arts, and cultural and contemporary entertainment. Ghouls, witches, banshees, and vampires flood the city’s streets and 17th-century walls before the wild festival culminates in a truly magical fireworks show by the River Foyle. This really is one of the best Halloween destinations in Europe in 2021! 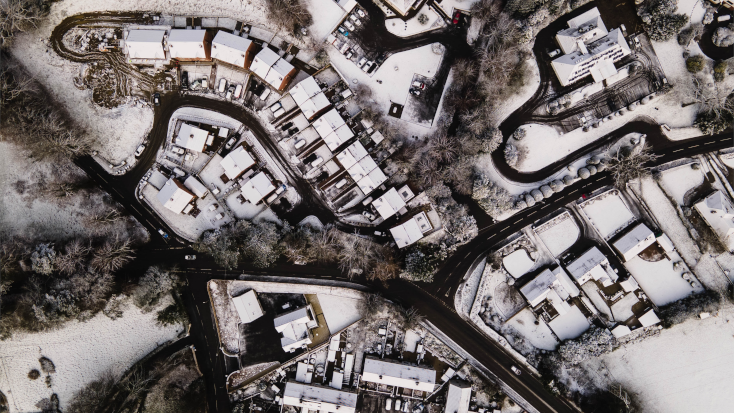 6. Fly across to Venice, Italy: potentially the best Halloween destination in Europe…

Fabled as a city full of shadowy lanes, mysterious canals, and secretive masked balls, it goes without saying that the City of Bridges is one of the most unforgettable places in Europe to spend Halloween. Potentially the best Halloween destination in Europe?

Visitors looking for real fright can tour the abandoned island of Poveglia, which is full of tragic history. During the Roman Empire, it was the place plague sufferers were taken to die. More recently, the insane asylum on the grounds was home to the screams of tortured souls, resulting in wide-spread rumors from the mainland of heinous experiments carried out by disreputable scientists and doctors.

For a night of horror on the water, a Halloween party on a haunted galleon is sure to do the trick. Party the night away on a phantom vessel surrounded by zombies, skeletons, witches, and vampires. 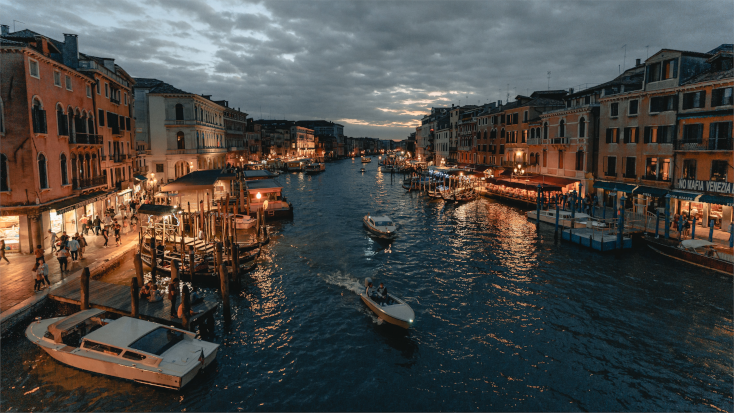 7. Head to another one of the best Halloween destinations in Europe in 2022: Paris, France

Although a global center for fashion, the arts, culture, and gastronomy, the City of Lights hides a dark and disturbing past. Deep below the wide boulevards and Gothic cathedrals lie the bodies of more than 6 million Parisians…

The macabre Catacombs of Paris date back to the 18th century when the overused inner-city mass graves were cleared out to stop the decaying stench from poisoning the air any further. It’s said that the rotten flesh from the bones was even stripped from the bodies and used to produce local soap, but the memory of the gruesome acts has never been washed away.

If the tombs don’t satisfy your bloodlust, the Halloween Vampire Ball at Pachamama is the location for the insatiable vampires of France to leave their sorrowful castles for one sinister night of excess. Attend the frightful ball at your own risk! 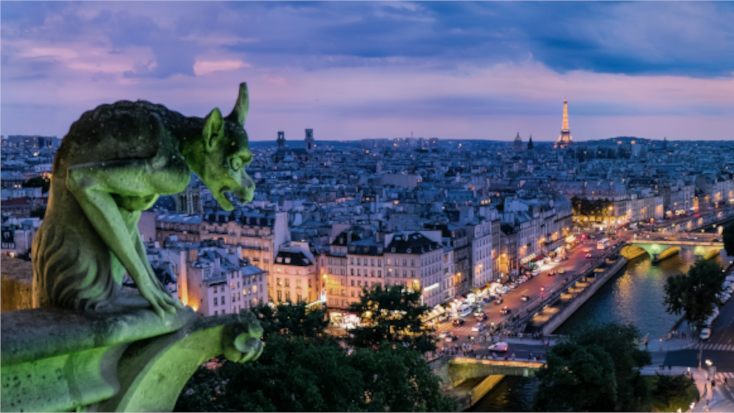 8. Where to go in Halloween 2022 while living in Holland: discover Amsterdam this year

Still wondering where to go in Halloween in 2022? Renowned as one of the most progressive cities in Europe, Halloween in Amsterdam is the place to be for visitors looking for debaucherous parties, blood-curdling costumes, and spooky ghost tours.

Those seeking some gory history can make the visit to the Amsterdam Dungeon, which has thrilling shows, amazing special effects, and over 500 years of Amsterdam’s dark past. The party animal of the group will be drawn to the terrifying costumes at Obscene Halloween, which showcases a real horror extravaganza. Visitors tough enough to last the night will encounter everything from pagan sex gods to satanic burlesque vampires. Whatever your darkest fantasy may be, you’re sure to find it here. 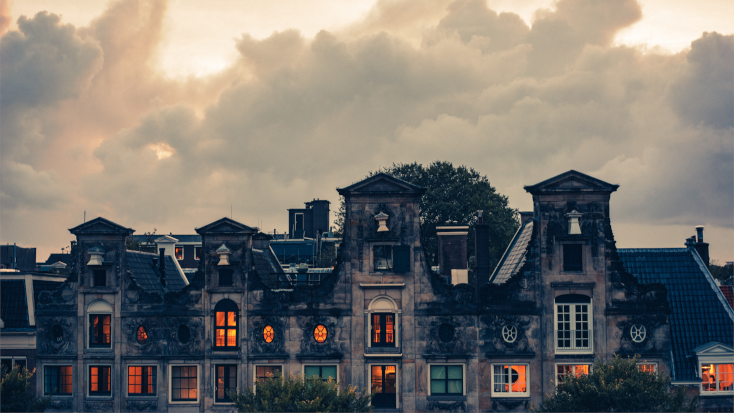 9. Discover more of the best Halloween destinations in Berlin when you visit Germany in 2022

As the resting place of the Brothers Grimm, it’s no surprise that the capital of Germany is filled with fairy tales and folklore. Tierpark is one of the hot spots during Halloween, as the gorgeous park is transformed into an enchanting forest filled with winding paths, dark shapes, and daunting figures. The park’s extravaganza is growing in popularity and this year’s festivities will be more terrifying than ever!

The children of the night will definitely want to gaze upon the incredible laser show at Schloss Friedrichsfelde, while the intriguing Berlin Dungeon show will sweep you away to the dark world of The Grimms’ Fairy Tales during your time in yet another one of the best Halloween destinations in Europe this year. 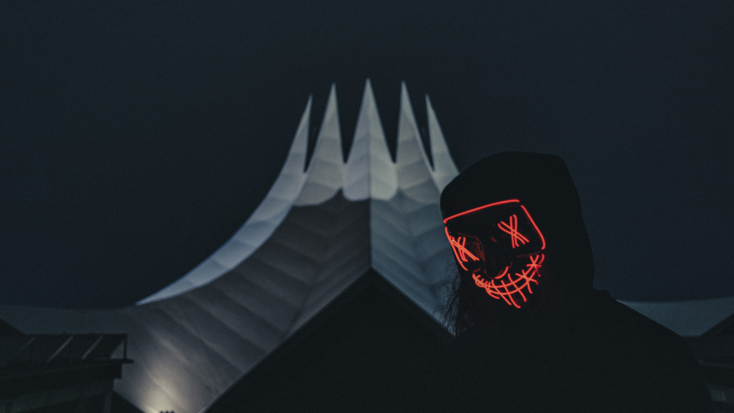 10. Halloween in Prague: head to the wacky capital of the Czech Republic for spooky breaks in 2021

As a city steeped in Gothic fantasy, walking through the foggy narrow streets and around the winding medieval lanes during Halloween in Prague is sure to fill any visitor with a sense of wonder and awe. The stunning architecture and imposing statues, however, are also the base for many ancient legends and local ghastly ghost stories.

The main Halloween attractions in this complex city include the Torture Museum with its harrowing instruments; the somber church of Sedlec Ossuary made from the bones of over 40,000 human skeletons; and the Old Jewish Cemetery, which contains more than 100,000 bodies buried beneath medieval headstones, many of the graves containing multiple lost souls stacked up to 12 deep.

When darkness falls, the city center puts on a wide variety of fiendish parties and events and anyone wandering the creepy roads at night is sure to find some freaky fun with fellow terror lovers. 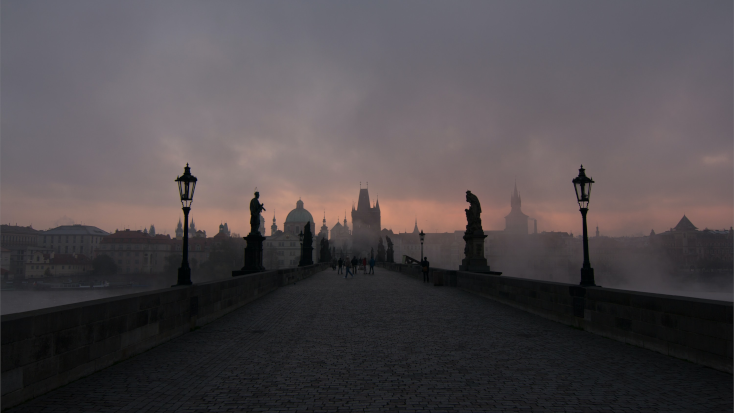 Want to see Glamping Hub take a stab at giving the Brothers Grimm a run for their money? Read our best spooky Halloween stories here!

One thought on “The Best Halloween Destinations in Europe 2022: Spooky Getaways”